I wake up late this morning and thought I would not be able to image the Sun as i got around less than 10 minutes of observing window before the Sun will be obstructed by my house's roof extension. But I still managed to setup and observe the Sun and to my amazement, a huge eruptive prominence jumped out of my eyepiece's view! It is one of the largest I have seen these past years so I quickly image it asap. Seeing is fair at 1/5 but the prominence is nevertheless beautiful! Image can be viewed below: 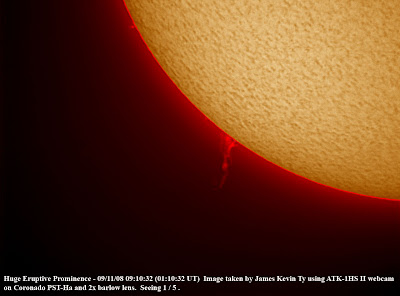 3 hours after I image the huge eruptive prominence, the prominence had already ejected its shell away from the solar limb which can be seen faintly from ther image I took. Seeing was terrible as thick clouds keeps on passing in front of the Sun thus preventing me from getting a good shot of the prom. Nevertheless, the prom can still be seen faintly. 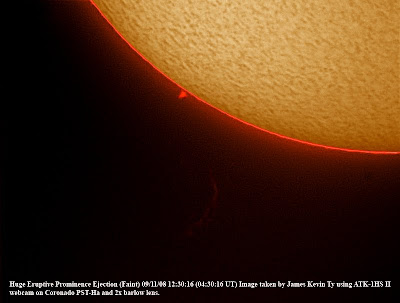