Last May 16, I together with fellow ALPers Andrew Ian Chan and Babak Parhizkari went to Nasugbu , Batangas and try to document the Venus Occultation by the Thin Crescent Moon. Aside from Nasugbu, ALP also have 2 more observing stations which were in Astrocamp Observatory in SM Mall of Asia as well as in Candaba , Pampanga.

I decided to lead the Nasugbu team so that we will have alternative sites as well to get better chances of documenting the event successfully instead of just one observing site. Also, the reason to pursue the Nasugbu site is because of the low latitude reappearance of Venus from the bright limb of the Moon which was a bit low at 3 degrees in Manila.

In Nasugbu, the reappearance is also very low at 2 degrees above horizon. The good advantage here is that the Venus and Moon will set at the sea line instead of mountains and the plus factor here is that we were able to get an additional 2 minutes more before Venus exits the bright lunar limb. Venus exits at 8:18pm Manila Time compare to Manila's 8:16pm.

Anyway, we depart Manila at around 11:00am and arrive in Tagaytay at around 1:00pm. We then had lunch at Terriyaki Boy before proceeding to Nasugbu, Batangas. We arrived in Nasugbu at around 2:45pm and stayed at Johndel Beach Resort which I had several occultation observing events there before whenever I need a clear out western horizon.

We checked in at the 3rd floor so that we will have an easier time to transport our imaging equipment to the roof deck with convenience later. Inside the room, our astro imaging equipments lay scattered out all over the floor and beds to ensure all items needed area
are intact. 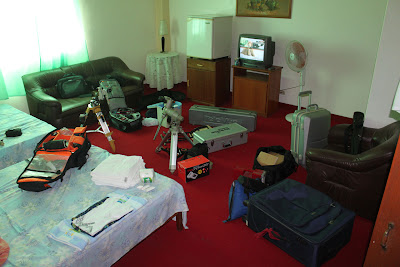 At around 5:30pm, we started to setup our equipment and try to image the elusive green flash but unfortunately, tough luck for us as no green flash was visible with the Sun got flattened out in the sea horizon :( Anyway, better luck next time for us. For this event, I brought along my trusty TV-101 refractor and GP-DX mount. I also installed a Digital 8 video camera so that I can document both in still and video mode. Andrew, on the other hand brought along his Skywatcher 80ED refractor on his new GP mount equipped with Sky Sensor 2000-PC. Babak brought his WO Z70 ED refractor as well as Skywatcher 102mm Maksutov-Cassegrain telescope which he will install on his highly portable Takahashi Sky Patrol 2 mount. Initially, I plan to use my Kenko Sky Memo for this event, but since Il don't have a lighter ED refractor such Megrez 72FD or the one I like most, Canon EF 100-400mm F/4.5-5.6 IS L lens. I decided not to bring it and use my old previous mount system instead.

While the Sun is setting, Babak called our attention and pointed to planet Venus which was several degrees above the 2.5 day old thin crescent Moon! It was a very beautiful sight to behold as Venus got closer and closer to the dark limb of the Moon! We stated to check our exposures to get a good balance exposure of the Moon with Earthshine as well as Venus without over exposing too much to make the planet Venus become a blob of light.

At around 7:30pm, we started to monitor Venus as it gets closer and closer to the dark limb of the Moon. At the same time, a lot of my friends and colleague started to call my mobile to ask what the bright star that is above the Moon. I told them it was planet Venus and they were quite surprised and excited when I told them the Venus will disappear suddenly at around 7:36pm :) For our area in Nasugbu, estimated time of Venus disappearance (Ingress) will be at 7:36pm and exits behind the bright limb of the Moon at around 8:18pm. 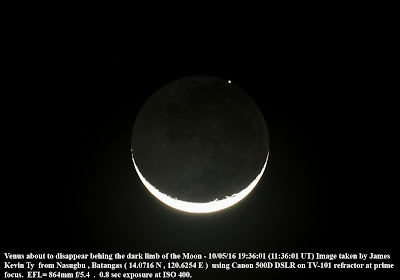 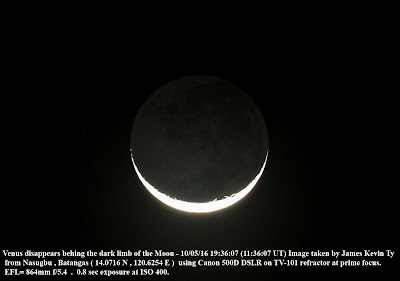 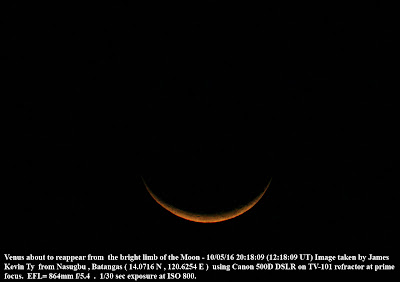 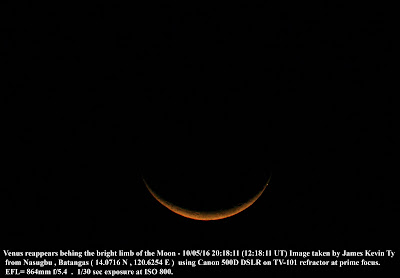 After the event, Babak and Andrew tried testing their new mounts on starts and DSOs to check tracking accuracy. Before we packed up, we had our traditional group shot taken and when we arrived back to our airconditioned room, we cool down our body then took a good shower and started to load our stuffs back to the car. Since the restaurant was already closed at 10:30pm, we had our very late dinner at Jollibee Tagaytay before going back to Manila. 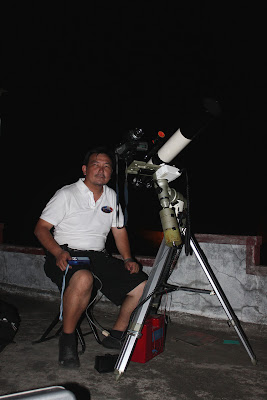 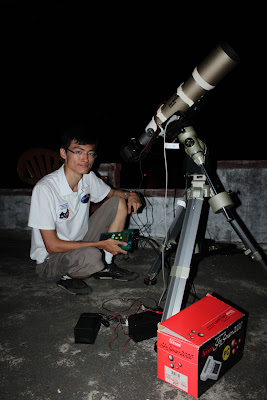 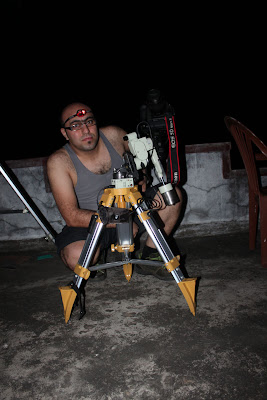 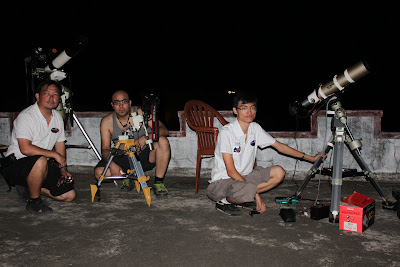 ALP Nasugbu Team posed for posterity after the successful documentation of the May 16, 2010 Venus Occultation by the Crescent Moon.

Overall, this was a very great activity for me as I got to again observe and document another rare event together with great guys like Andrew and Babak! :)
Posted by TV-101 at 8:05 AM