Last June 26, there was a partial lunar eclipse that was visible in the country. ALP President James Kevin Ty went to Trinoma Mall in Quezon City at around 4:00pm and park my car at the roof deck of Mindanao Parking Area, Fellow ALPer Andrew Ian Chan had scouted the area already before and told me that the ESE position at the roof deck has a clear out area for me to observe and image the eclipse. Unfortunately, Andrew cannot join me there because he had a prior commitment to attend his best friend's debut, James was supposed to have Zed Contractor joined him there also but had to beg off because he was worry that the weather will not cooperate with us that evening :(

For this eclipse, James opted to brought along my Canon EF 100-400mm f/4.5-5.6 IS L lens to image the Moon that evening. I brought along my portable setup Sky Memo mount as well as a sturdy tripod to use whichever is practical to use that time. The sky memo is so portable that it can fit into a camera backpack easily as compared to his workhorse Vixen GP-DX mount which is bulky and heavy as well. 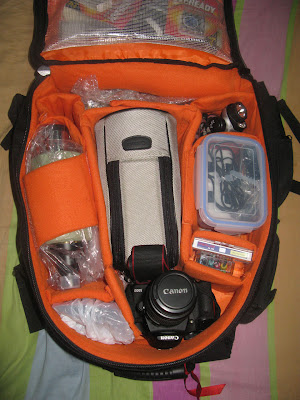 Unfortunately, the weather was so cloudy in the ESE horizon that they missed observing the eclipse at moonrise :( At around 7:15pm, rain started to fall and both of them had to use James' car trunk door as rain shield for them. With the weather getting worst, Lea opted to go down to the lower floor and try to observe the eclipse there. James opted to stay put and waited till around 8:25pm before he saw a faint Moon glow from the thick rain clouds! He quickly brought out his Sky Memo and tripod and camera lens to the side of the concrete roof and started to image the eclipse Moon through thick clouds :(

Lady uck then started to smile on him as the Moon started to show up despite the rain and he was able to start imaging the eclipse despite continued rains. The Moon image was a little soft at the start and gets better and better at around 8:35pm and the rain stopped and James brought out his mount and set it beside his car and was able to image the latter part of the eclipse from 8:30pm till 9:26pm clearly before the clouds started to roll in again :( As he was imaging the eclipse, he was also able to show the partial eclipse in between exposures to a batch of Trinoma security guards who were at the roof deck getting their orientation from their security head. They were delighted as well as surprised to know that there was an eclipse ongoing and commented to James that the eclipse view was beautiful and they were amazed at the setup he had that evening. Very portable indeed!

James packed up at around 9:30pm and went home very happy and glad that he was able to observe the eclipse nevertheless and still not come out with an empty hand :) 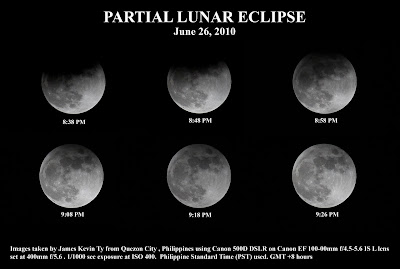 Thanks for the kind comment, I hope my work casn be an inspiration for you to pursue this field as well.