On the early evening of  May 26, 2021, there will be a total lunar eclipse that will be visible in the Philippines as well as Asia. The Moon will rise at around  with more or less 50% umbral partial phase  started midway already  at 06:18pm PST (Philippine Standard Time) so it is best to find an observing site with a clear eastern horizon.  This eclipse will pass near the Northern path of the Earth's shadow thus  totality for this eclipse will be quite short at around 15 minutes only ! Moon will enter Totality at around 07:11pm PST with maximum totality phase occurring at 7:19pm PST with the Moon at around 11 deg high in the SE horizon near the constellation of Scorpius so the bright star Antares will be around 5 degrees below the eclipsed Moon.  Totality will end at around 07:26pm PST. Afterwards, the Moon will gradually start to exit the umbral shadow until it exits umbral phase at around 08:53pm PST. The Moon will totally exits the penumbral phase at 09:50pm PST signifying the end of the eclipse event.

Full Eclipse circumstances are as follows:

The Moon is expected to still be bright during totality so this is also favorable for imagers who doesn't have a motorized tracking mount. Good luck to all and clear skies! 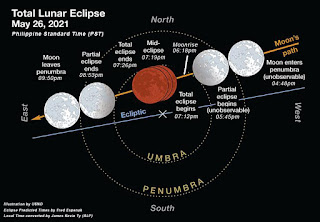