I was planning to go to PAGASA Observatory this evening to try to image Comet 103/P Hartley 2 but the sky condition was very hazy and further confirmation from fellow ALPers Christopher Louie Lu and Henry So who live in Mandaluyong City and Quezon City area respectively that the sky in their area was very hazy and can see Jupiter and Moon. I decided to cancel my plan trip to PAGASA Observatory and instead stayed home and try to observe and image planet Jupiter.

Since this is my second time to try imaging Jupiter with my modest sized scope, I quickly get to center the planet in my camera field of view easily this time com[pared to my last session. Jupiter was nice to view this time as the Great Red Spot (GRS) is near the central meridian and both Jovian satellites Europa and Io are also captured int he same field with Jupiter. Jovian satellites Ganymede and Callisto are much farther out of the field of view of the camera thus were not included in the final image. Oval BA or Red Spot Jr. can also be seen at lower right of GRS as well.

I do hope to improve my skills in planetary imaging in the days to come and get some decent image for my own collection :) 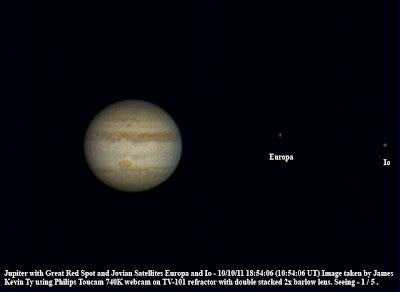 Based on fellow ALPer John Nassr's recommendation and advise that I add more frames into my initial image above which only has around 300+ stacked frames compare to the one I reprocessed with around 900 frames out of 1200 frames. Result can be seen below: 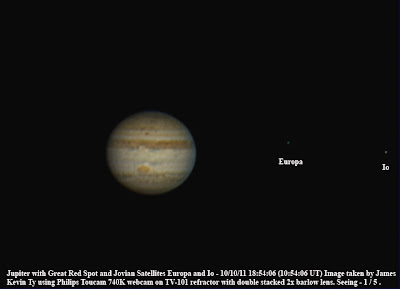