The Sun is a bit quiet today with some small to medium prominences visible at the solar limb. Hoping for more nice big ones to appear in the days to come. 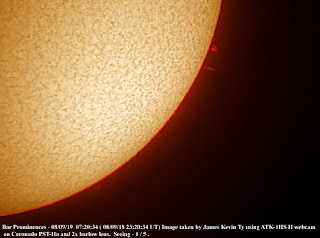 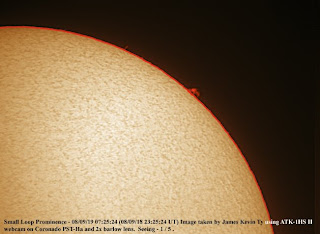 I need to go out in a hurry this morning because I have to renew my driver's license so I had a short quick image setup session only. But to my surprise, Wow! A beautiful large loop prominence greeted me and teasing me stay longer and forget renewing my license :) LOL. But I had no choice even though I want to stay much longer to image its progress. Nevertheless, it one of the biggest in several months! Nice details as well. Image taken using ATK-1HS II webcam on Coronado PST-Ha and 2x barlow lens. Seeing was not bad at 2/5. 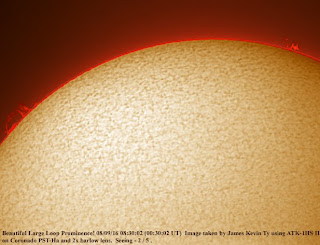 I just got to process my solar images taken yesterday morning as I was busy yesterday :( Nevertheless, solar activity was not that great and one can see several small nice prominences around the solar limb. Hope for some actions in the days to come............. 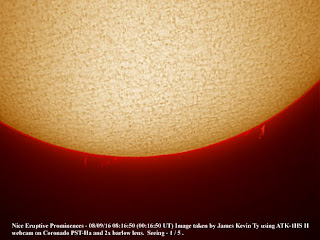 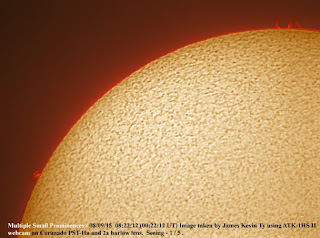 Finally after almost 5 days of cloudy and rainy days, I was again able to do solar observation and imaging this morning. Seeing was not that good but there is one prominence worth imaging. a nice long bar prominence. Not much detail of the prominence except that it looks a "Pinocchio" nose :) LOL Several other small prominences can also be seen in the limb as well. 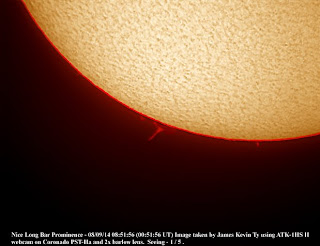 I was able to image the Sun yesterday morning but was too busy to process them till late this morning :( Nevertheless, the Sun was not that active although it got to display a few small prominences only. Below are the images I took of the 2 prominence groups. Seeing was not good as well :( 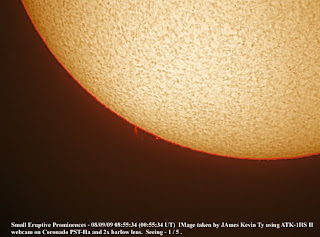 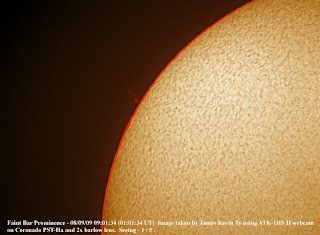 Eager to still monitor yesterday's large long bar prominence, I started out early this morning and view the same prominence and observe that the prominence is starting to disintegrate :( Although it is still a joy to view at it. Don't know if it will still be there tomorrow........ let's wait and see :) 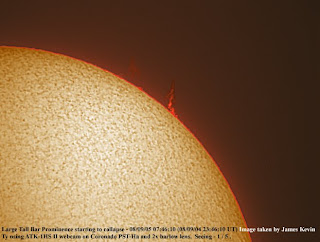 As I scan the limb for the other large prominence that I got to view but wasn't able to image, it has grown in size a bit but very faint and I wasn't able to see it visually but through webcam, I was able to acquire it and it can be seen below: 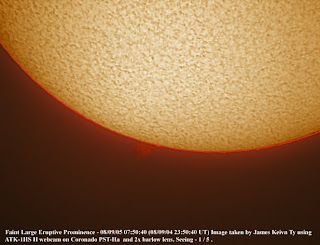 The sky this morning was not that good but I still try to glimpse at the Sun and was happy to see a long slightly bended large bar prominence! The height of the prominence is a joy to look at. There was another medium size prominence at the Sun's limb but I wasn't able to image it as clouds suddenly cover the sky where the Sun is located. :( 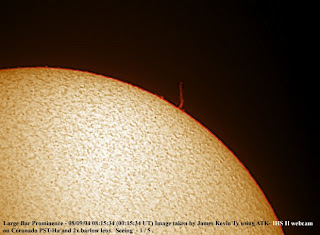 In the afternoon, I was able to make a followup look at the prominence through small openings in the cloudy sky and saw that the prominence had erected a bit to stand a little taller than what I saw in the morning. After I image this beautiful prominence, Rain suddenly poured hard without any warning . Thank God I had packed up most of my stuff from the laundry area where I image the Sun :) LOL 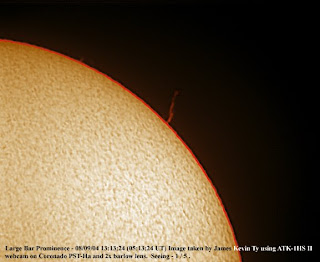 After getting clouded out yesterday, I was again able to image the Sun again this morning. As I focus on the Sun, there was a bright eruptive prominence that was clearly visible! Although the size is not that big as the big ones visible past few days, it is still a joy to observe and image. 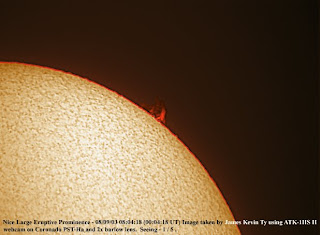 On the other side of the limb, there is also another nice eruptive prominence as well. Nice to view too. Seeing was fair at 1/5. Hope tomorrow we will get some big prominence again. Solar imaging / observation are highly addictive indeed :) LOL 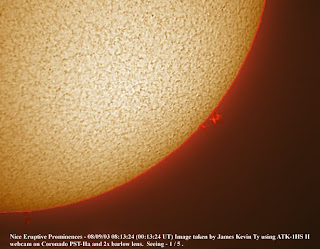 To my disappointment this morning, the many large prominences are now gone but there is still one nice eruptive prominence there to give me sort of finale view before it disappears as well :( My solar image taken yesterday August 31 was featured at www.spaceweather.com! I personally like that image as full of nice prominences! Its been a while already that we were able to see so many prominences in one frame :) LOL

For the solar images below, one can see the big eruptive prominence that is easily seen even in low power view. If one look closely at the pic below,you can see a big, tall faint bar prominence in between the large prom as well as the smaller but brighter prominence as well. I wasn't able to see that one until I was imaging it. Even in the image below it is hard to see and can go unnoticed :) 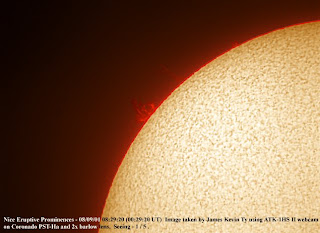 In the image below on the other hand, the prominence is small but cute and since it is visible, I got to image it altogether :) Seeing this morning was not that good at 1/5 but still ok IMHO. 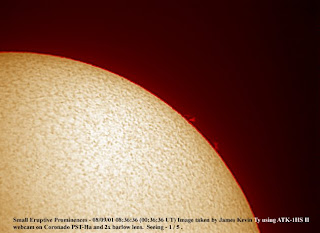