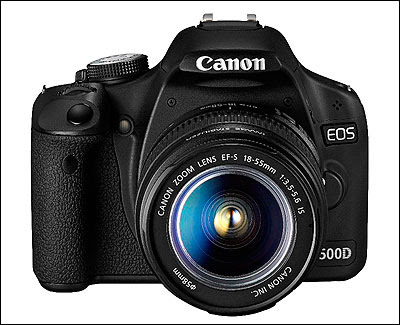 After more than 6 years of using the old reliable Canon 300D DSLR, I finally decided to upgrade and get the new Canon 500D with EF-S 18-55mm IS lens. My decision to upgrade was that the processor is now very slow for me to shoot RAW at continuous burst shots. With the 300D, I could only fire at most 4 frames then the data will get buffered for more than 5-7 seconds before I could shoot straight again. Even with the image file set at full size JPG, I could only muster a maximum frame shot of around 5 shots before it halts to save the image data to memory card.

I got to feel the need to upgrade when I was making a dry run of my eclipse imaging camera setup for the upcoming July 22, 2009 total solar eclipse that will be visible in China. In the Philippines, Manila will get eclipsed for around 49%.

With the need to image at a faster rate specially during the the shprt time span before scond contact, I cant afford to get stuck with its slow speed data transfer and lose precious seconds for the moment.

I would love to get the 5D Mark 2 or 50D but my budget doesnt allow me to do that so the 500D is good for my needs for now. With the unit on hand, I was surprised that it is very light and feel like a toy! But careful playing around with the camera reveals otherwise. This camera is not a toy but a good performance camera for its budget. With the new Digic 4 processor as well as 15.1 MP resolution, this camera has a lot of imaging power. Another good feature of this camera is the built in HD video mode that can take a good video of general view. Although the highest HD mode of 1920 x 1020 has a 20fps rate, i feel this doesnt much affect my general initial test on my son playing around as well as astronomy use to image the Moon or Sun perhaps but that havent got the opportunity to test it. Maybe if one is trying to image a moving car or train, then the lag will be noticeable. But another video limitation this camera has is its inability to have manual exposure compensation unlike its bigger brother, the 5D Mark 2. Althought the 5D Mark 2 initial production also has a auto exposure mode only, Canon consumer and professional community was able to convince Canon to release a new firmware thus allowing it to have manual exposure control.

There is also a big petition now from Canon 500D users (including me) requesting Canon to also release a firmware for us to have that option. I feel Canon was afraid that if they make a firmware upgrade for the 500D to have also manual exposure mode, it will affect their high end DSLR and video camera sales. But I do beg to disagree because no amount of firmware upgrade can make the 500D beat the high end Canon units in the market beacuse the high ends like 5D Mark 2 has a 25- 30fps speed which the 500D doesnt have (20fps) thus there is still a bit of limitation. I do hope the petition will be granted and as a loyal Canon user since 1988, i will be as loyal as ever!

Anyway, I will try to make more test on this unit and will post more updates on this camera as well the the 5D Mark 2 on loan from Canon Philipines for my eclipse test review both still and HD video for this coming July 22 total solar eclipse.
Posted by TV-101 at 3:18 AM No comments: