It seems that my prayers are answered and the Sun decided to show more large prominences this morning for me to image! Yesterday large loop prominence has started to collapse but more eruptive prominences popped out from the other image that I took of a fainter eruptive prominence yesterday. Please compare the 2 images that I imaged today with the one I got yesterday. The Sun is very dynamic and really worth monitoring daily or even hourly if time permits :) LOL Seeing today is fair but I had a hard time imaging the groups of prominences because if persistent clouds but nevertheless, I was still able to image them and can be viewed below: 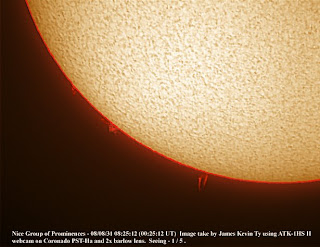 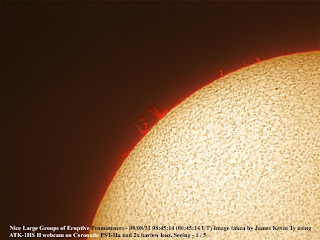 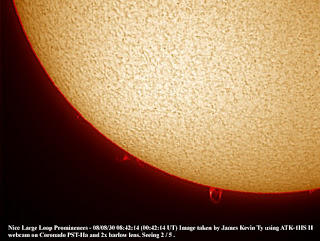 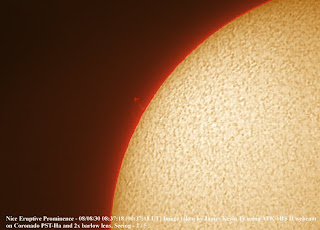 I monitored the large eruptive prominence that I saw and image yesterday and it has shrunk in size but still nice to view :) Seeing today was not good but I still image it for record purposes. I hope there will be more large prominences in the days to come so it will satisfy my thrist for solar imaging and viewing :) LOL 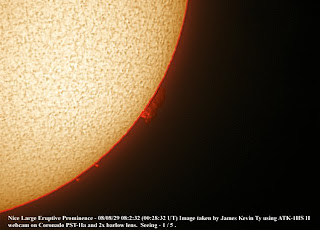 I just came back from provincial trip and was greeted with a nice large eruptive prominence this morning! Image taken using ATK-1HS II webcam on Coronado PST-Ha and 2x barlow lens. Seeing is fair at 1/5. 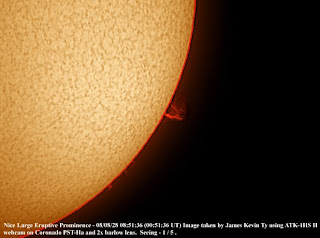 I just got back from my provincial trip and was glad that I can again view the Sun through my eastern window in the morning. The Sun had shifted NE during the months of May through mid August so during these times, I had to setup my scope to image the Sun at the laundry area of my place. But starting mid August till May, I would be able to image the Sun once agan at the comfort of my house's window :) The seeing was not that great today but I was able to see 2 nice eruptive prominence on the Sun's limb.

I quickly setup my PST-Ha and got to image to the 2 prominences before clouds covered the Sun again :( Below are the images that I took using an ATK-1HS II webcam on Coronado PST-Ha and 2x barlow lens. Seeing was 1/5. 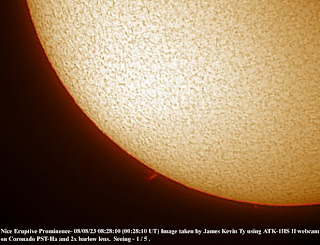 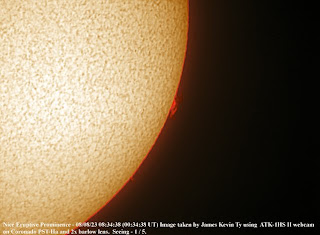 It was another good clear sky this afternoon for me to shoot the Sun again. As I tak a peek of the Sun, I was able to see a nice eruptive prominence that was very bright and large. I was able to image the prominence using my Coronado PST-Ha and ATK-1HS II webcam . Seeing was steady again with a scale of 2/5. 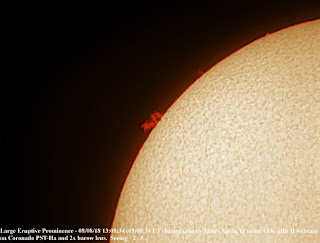 Amid a very bad rainy evening last August 16th. I went to PAGASA Observatory in UP-Diliman to observe the August 17th partial lunar eclipse. I was joined by fellow ALPers Edgar Ang, Vincent Lao, Peter Benedict Tubalinal and Jett Aguilar. We arrived at the site at around 1:45am and I quickly setup my TV-101 refractor on Vixen GP-D mount. I also brought along an Orion ST-80 refractor on sturdy tripod for use by rest of the gang :) A little later, Jett arrive and also started to setup his telescope. 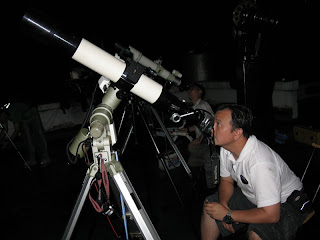 The sky western horizon where the Moon is situated was clear at the start of the event from 2:15am til around 3:30am wherein thick clouds started to ruin the event :( Although the eclipse can still be easily seen, it was a nightmare for us imagers as exposures was thrown off by more than several stops!!! Nevertheless, I still took patience and waited for some open window for me to shoot the eclipse. The weather would come in thick at times and then suddenly thinned out for us to be able to image the eclipse at maximum eclipse through thin haze. 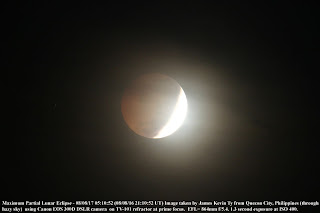 At around 5:15am, the sky was becoming bright already and harder for us to shoot the eclipse Moon any further and we called it a day! We were all very happy that the sky did give us some breaks for us to document the event. We took a group shot before packing up. Below are some images that I took of the event and one can see how bad the sky as during the imaging session as seen through my composite image. 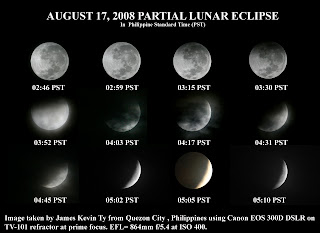 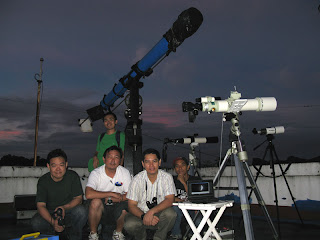 The weather this afternoon was good so I quickly setup my Coronado PST-Ha to take a peek at my old friend Sol. Wow! There is a nice bright eruptive prominence at the Sun's limb! I quickly image the prominence and after 3o minutes of observation, the sky clouded out again :( Seeing was good at 2/5. Image was taken using ATK-1HS II webcam on Coronado PST-Ha and 2x barlow lens. 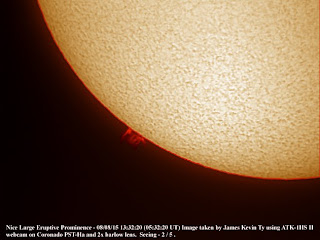 I was able to get a small break for me to image the Sun with my PST-Ha this afternoon. I was able to see a nice projection (bar) prominence in the Sun's limb. The sky was not good (1/5 scale) though as there was some haze in the sky that make the image a bit soft. Nevertheless, better than nothing. IMHO. 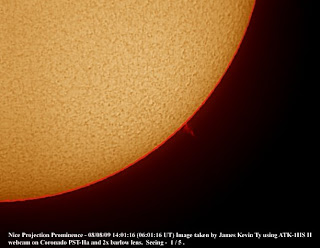