The sky this morning is really cloudy and when I saw some opening in the sky, I quickly setup the Coronado PST-Ha to check on the Sun. Unfortunately, it was too cloudy and haze that I can't make out any details out of the Sun. So after a while, I dismantle the scope and do my office paperwork instead. After 30 minutes, another opening came out and I again setup the PST to get a glimpse on what's going on on the Sun as I missed viewing it since March 17th.

As I focus and on the Sun on the computer screen, I was surprised to see a super huge eruptive prominence in the NE limb of the Sun!!! Wow! If I didn't patiently re-setup , I could have missed it!

Aside from the huge prominence, there is also another large eruptive prominence in the SW limb as well. AR11175 Sunspot Group is large but solar activity inside its core is quite low IMHO.

Another good interesting feature to watch tomorrow is the re-emergence of AR11165 Sunspot Group in the SE limb. Unfortunately, I got clouded out again as well as roof obstruction so I wasn;t able to image it :(

Another thing is that I'm on my provincial work trip today so no more chance for me to monitor the new sunspot group in the coming days as I will be back next weekend in time for the Messier Marathon 2011 under the dark skies of Caliraya, Laguna together with fellow members of the Astronomical League of the Philippines (ALP). 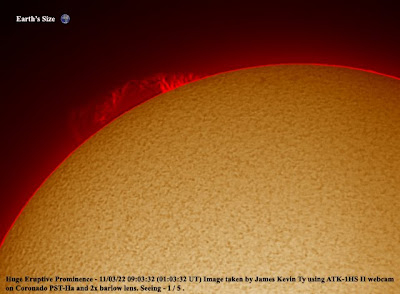 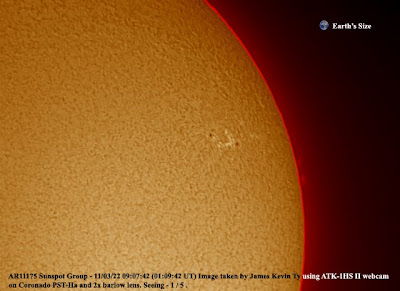 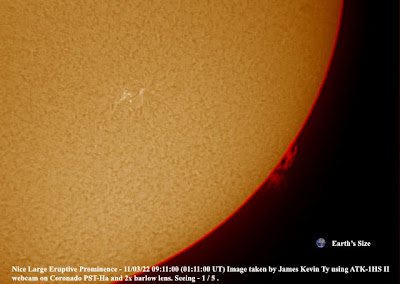 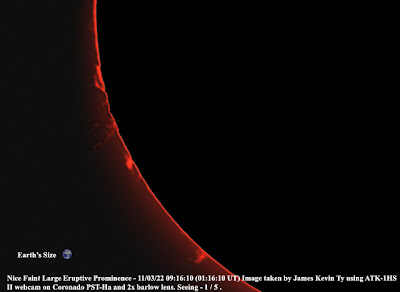