The sky this morning was a bit hazy but I could still see the Sun so I setup quickly and try to view it visually to see if there are any big prominence that is worth imaging. After setting up the ATK-1HS webcam on the Coronado PST, I scan the solar limb to check on any faint big prominences that might be hiding behind the glare of the Sun and indeed there was a faint medium size faint eruptive prominence faintly visible and because of the bad haze that morning, I was forced to increase some gain settings to force the faint light of the prominence to be visible. Nevertheless, below is the image that i took of the faint eruptive prominence. 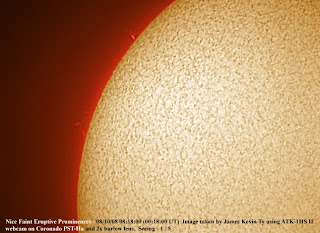