The sky this morning was really cloudy and I initially don't intend to make any solar observation and imaging today because of it. But at around 8:45am, I saw some sunlight reflecting on our window a bit but as I check on the Sun, the sky was still cloudy but some sunlight still passes through the clouds and my solar adrenaline pumps up again and urged to to take a look at the Sun even for a short time :)

As I check on the Sun, I can see AR11127 Sunspot Group as a small group with a nice group of eruptive prominences at the NW limb. But passing clouds tends to give me a hard time to image it but nevertheless, I still got to image it despite very bad seeing condition :( As I scan for any other solar activity around the solar limb, I was able to see a possible new AR11128 coming out of the SE limb but unfortunately, I wasn't able to image it because the clouds shut me out totally after 9am :( 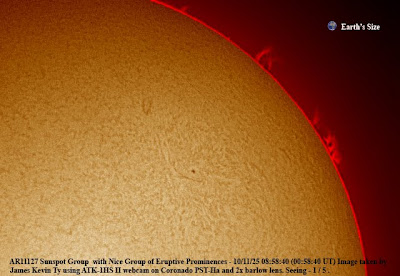