Last January 15, 2010, As the partial solar eclipse is coming to an end as it nears the island slope of Corregidor, a small bright yellowish green "mirage like" flash was seen for a few seconds before it got clouded out by a small strip of black clouds. My initial reports stated that I might have witnessed the rare and elusive "Green Flash " effect which normally pops out for a few seconds as the Sun sink into the horizon. But for this image below, the Sun had not yet set in the horizon so it was very weird and all conclusion points to the fact that I might have image it. I send the image to spaceweather.com and hoping for them to help me confirm if I indeed got it. 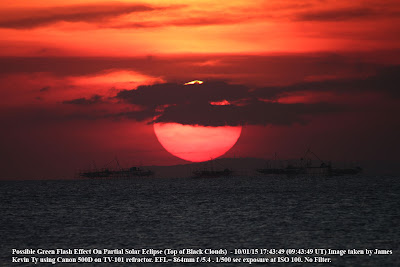 My image was selected as one of the good images that was featured in the eclipse gallery and I was able to get a good explanation from atmospheric optics expert Les Cowley: "This is possibly a 'cloud-top' flash. There are two broad flash types, one is the classical Jules Verne flash when the the last sliver of sun disappears beneath the horizon. The other, much harder to see visually but more often photographed, is where the top of the sun flashes green while much of the disk is still above the horizon. The cloud-top flash is a variant of the second type and it might be caused by an inversion layer associated with the cloud top. We do not fully understand them!"